Psi Mu Ques Are Having A Major Impact For The Mountaineers 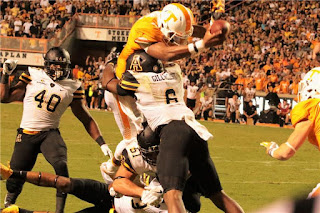 The Appalachian State Mountaineers (4-2, 2-0) dominated the Louisiana Ragin’ Cajuns (2-4, 1-2) 24-0 Wednesday night at Cajun field. The Mountaineers were able to pick up their second Sun Belt win in as many attempts thanks largely to another impressive performance turned in by the Mountaineer defense, spearheaded by senior Linebackers Kennan Gilchrist and Toronto Thomas, both members of Omega Psi Phi.

Gilchrist is the team’s leading tackler. The Abbeville, S.C. native has lead a stout Mountaineer defense that has yet to allow a touchdown in Sun Belt play. With 51 tackles, including 5.5 TFL’s and a forced fumble, he has made an early case for Sun Belt Defensive Player of the Year. Thomas has enjoyed his finest season, including 2.5 TFL’s and a sack. 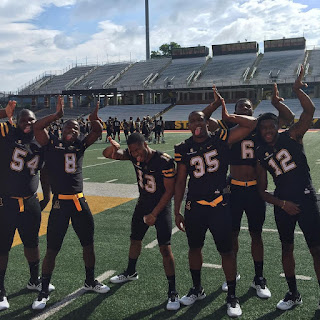 The Vicious Psi Mu chapter is well represented on the App State roster.  Senior Nose Tackle Darian Small and Junior Cornerback Brandon Pinckney have also contributed defensively. Small is an anchor on one of the deepest defensive lines in the country, and Pinckney has contributed a pick to a secondary tied for 8th nationally in interceptions.

Offensively, Junior Wideout Dante Jones averages over 8 yards per catch and Sophomore Running Back Josh Boyd returned from an injury suffered in camp to rush for 42 yards on 7 carries in last night’s win over the Ragin’ Cajuns. The Mountaineers will enjoy a few days off before preparations begin for the Idaho Vandals in next Saturday’s homecoming game.
Posted by Unknown at 6:04 PM No comments:

In My Humble...™ Split Decision: Fight of the Year

Latest edition of In My Humble...™ The Split Decision. We welcome Rudy Mondragon to the In My Humble...™ team. Rudy and Pierre discuss a number of topics to include the Timothy Bradley vs Brandon Rios matchup, Mikey Garcia's expected return, and more.

The In My Humble... crew sits down with former NC State point guard, Monica Pope, as she reflects on the influence Kay Yow had on her life.
Posted by Unknown at 3:25 PM No comments:

Video shot, edited, and produced by the In My Humble... crew. A Banks Boy production.
Posted by Unknown at 5:43 PM No comments:

In My Humble...™: Mayweather vs Pacquiao

Posted by Unknown at 8:08 PM No comments:

Webster defines a point guard as a guard in basketball who is chiefly responsible for running the offense. The one, the point, the floor general, and the primary ball handler. Usually when a player brings the ball up the floor, directs the offense, and (most importantly) is listed as their team's point guard he is recognized as one of the before mentioned terms. When most basketball purest think of the point guard position they reminisce on a time when a floor general's first and second option was to pass the ball. A time when 20 shots for a point guard in a single game was appalling. A time when a point guard's fame only came as the result of making their teammates look good. For those fans these are strange times.

The game they fell in love with has transcended, and no position has evolved more than the point. Russell Westbrook is listed as Oklahoma City's point guard, but if you ask most hoops fans he is anything but. His season averages are staggering: a league best 27.8 points, 7.3 rebounds (most among guards), 8.5 assists (fourth in the league). The numbers suggest that he's playing the best ball of anyone in the association, let alone his position. His explosiveness, court vision, and ability to score the basketball is at this point unmatched. His nine triple doubles this season make it almost un-American to leave him out of the MVP conversation. Friday night alone he posted a line of 36, 10, and 14 against the eastern conference's best squad. All this said (or typed), whenever I dare to voice my humble opinion that Mr. Westbrook is the best point guard in the league an alarming number of people reply "but he's not really a point guard."

It puzzles me that Scott Brooks, a former NBA coach of the year and all around great basketball mind, trusts Russell Westbrook to run his offense, but the average fan wants to change the man's position. Those fans site Westbrook's aggressiveness and shoot first mentality as their chief complaints. One fan, who shall remain nameless, once described Westbrook as a "shoint guard," a shooting guard that plays the point. Who would you consider a point guard if not Westbrook? In today's NBA each team leans on their floor general to create, take, and make their own shots. The top assist players in the league, Chris Paul and John Wall, could at any point take over a game. More coaches allow their best playmakers to run the show, which puts their team in the best position to win ballgames. LeBron James can frequently be seen bringing the ball up the court and setting the offense. The reality is that Russell Westbrook can explode past whomever is given the tall task of guarding him on every possession, and his pull up jump shot is among the league's best. In his brilliance, Scott Brooks designs his OKC offense to run through his dynamic playmaker who can explode to the bucket, pull up for a jump shot, drive and collapse the defensive before finding an open teammate, turn a rebound into an instant fast break, and way more than you want to read in this blog post.

It seems that most people don't know what to make of Westbrook's athletic gifts. They have yet to see a point guard do the things he consistently does, so in their minds it's hard to categorize him as such. But is it right to say that someone is too talented to play their listed position? Though he has always put up numbers, this season is distinctively different for Westbrook. The reigning league MVP, Kevin Durant, has only appeared in 27 games and will likely be sidelined until next season. As a result, Westbrook has had to shoulder more of the offensive load and is averaging a career high in points. It also seems that the absence of Durant has opened up more offensive options for the Thunder. Westbrook is having no trouble finding those options, and his season assist average is also a career high. The fact is, the loss of Kevin Durant has elevated Westbrook's game to a level that would be impossible if they were sharing the floor. The Durant injury has forced Russell Westbrook to do what you would expect a superstar to do, put his team on his back and carry them to the finish. John Stockton may have been the measuring rod in '96, but at the moment Russell Westbrook defines the point guard position.
Posted by Unknown at 11:18 PM No comments: